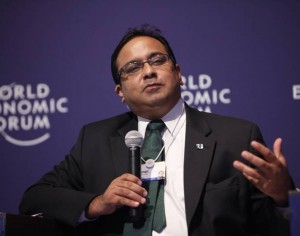 A strategic communication and media professional, Jahangir has been Honored as the Young Global Leader 2010 by the World Economic Forum for his work on initiatives to improve the state of media and its co-relation with innovation and development issues on media ethics in Pakistan.

He is the Founder and CEO for Mishal Pakistan and has launched the flagship program for Pakistan’s media development by bringing press clubs & journalists’ associations on a common platform to identify gaps in issues impacting the society and media ethics. The initiative has brought more than 30,000 professionals together to understand the socio-, economic and political challenges and their impact in the new economy. He has also worked on the national strategy to engage media to develop policy frame work and its dissemination at the grass root level. He is taking his media development initiatives further with his not for profit media social enterprise AGAHI, as member of the Board of Governors and Executive Chairman, where he launched Pakistan’s first ever Journalism awards with the slogan of “Agahi Awards – Shaping the Future of Journalism”

He is currently in the process of establishing the Global Task Force on Communication, Media and Journalism. Apart from that he is also the Founding Curator of the Global Shapers Community of the World Economic Forum. A WEF community, to identify and build the next level of global leadership from youth in the age bracket of 20 to 30 years. In 2011 Jahangir was also appointed as the Country Chair for the Global Dignity initiative, which encourages children to appreciate Dignity for themselves and for others in their communities.

He was made Advisor to the Stanford Center of Innovation and Communication, Stanford University on Journalism and Media in 2009-2010. The Festival of Media 2010, Valencia ranked him among the top 10 media personalities in the world.

Jahangir is an Alumnus of Harvard University, where he has been part of the programs on “Global Leadership and Public Policy for the 21st Century”, a program with Harvard Kennedy School; he has also been part of the Leadership Summit at Harvard Business School, as a partner with Prof. Michael Porter’s Initiative on Fast Growth Companies. Jahangir is also the only fellow of the Harvard Law School on the Program on Negotiation to “Deal with an Angry Public”; a program to address conflict and challenging issues in the context of ethical media practices.

Jahangir was awarded the Global CEO Excellence Award 2011 for Media Development in Pakistan, Innovation in Health Journalism Award by the Government of Pakistan in 2009 and the Health Media Award for Innovation in 2010. He was also bestowed recognition for being the most innovative strategist for inter-clusters communication between media & communications and various economic growth indicators. He has received multiple awards by various national and international multilateral entities for his contributions for media development in Pakistan including UNICEF, WHO, Ministries of Health, Government of Pakistan.

Most recently he was the CEO for SAMAA TV, the first satellite news channel providing live transmission simultaneously from various cities in Pakistan and UAE. Various initiatives of Jahangir have earned him and the organizations he has worked with numerous awards at national as well as international forums. At SAMAA he conceived and executed the award winning program on innovation, a program in collaboration with the Stanford Center for Innovation and Communication by engaging the innovation of journalism fellows from across the world. He has also been credited for creating the National Polio Control Cell to eradicate Polio out of Pakistan through a model of tripartite partnership between media, public, private and the donor agencies.

Amir has been a part of the launch team of the Competitiveness Support Fund, the first joint initiative of USAID and the Government of Pakistan. He worked on the medium-to long-term media development strategy for Pakistan as in-charge for the Innovation Journalism Program, a program in collaboration with the Stanford University to increase public focus on Innovation and cluster development. He has also been a strategic communication consultant to various other initiatives on economic & strategic development along with good governance. Jahangir also managed Pakistan’s partnership for the Global Competitiveness Network of the World Economic Forum and set a new benchmark for developing a comprehensive strategy for the Executive Opinion Surveys for Global Competitiveness Rankings of the World Economic Forum to collect soft data on Pakistan.

Earlier, he was at the forefront of the media industry in Pakistan as the CEO for Television Business Production Limited, the leading production company for business and economic news programs. He was also the founding CEO and Board Member of the Vision Network Television Limited, which launched the first internationally branded business and economic news channel CNBC Pakistan. Jahangir at the age of 31 became the youngest CEO for any CNBC franchise in the world.

Jahangir has also been the Executive Editor for the monthly information technology magazine “Computer News”, where he started his journalistic career as a technology reporter in 1997.