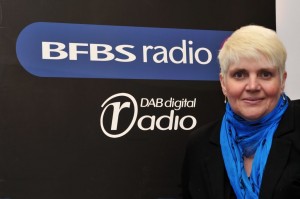 As Controller BFBS Radio, Nicky Ness has responsibility for three networks of output on local, national and international platforms aimed at entertaining and informing British Forces and their families wherever they may be based.

BFBS stations are found in locations such as Afghanistan, Germany, Cyprus, Canada, the Falkland Islands, Gibraltar, Northern Ireland, Nepal and Brunei.  More recently, BFBSUK was launched nationally on the DAB platform and on digital TV where a wider brief connects and supports family, friends and the larger community of interest with those serving around the world and most importantly in Afghanistan.

All services combine relevant music and speech content with an in-house news operation that retains editorial independence from the Ministry of Defence.

Nicky’s 20-year career with parent company The Service Sound and Vision Corporation (SSVC) began as a radio reporter for BFBS inGermanybefore moving into speech programme presentation.  After a move to Gibraltar she added music sequence presentation to her skills where weekend and late shifts soon turned into a weekday breakfast show residency.    Nicky was appointed as Station Manager in Gibraltar in 1997 and she became the voice of Gibraltar mornings for six years until she moved on within the BFBS Group in 2003. Belize and then Cyprus followed before Nicky returned to the UK when appointed Director of Entertainment at SSVC, joining the Senior Management Team and heading up morale boosting live entertainment events for troops deployed on operations around the world in locations such as Iraq and Afghanistan, which she has visited many times.  This is a role she retains, responsible for more than 400 live shows per year, combining the benefits of the live stage experience with the reach and immediacy of the broadcast environment.

After a 5-year break from radio Nicky is now firmly back in the medium she loves, concentrating on raising the profile of Forces broadcasting in the UK whilst continuing to sustain the needs of the overseas stations and their communities.

Nicky is also a Sony Radio Academy Awards judge and in 2011 joined the judging panel for the Student Radio Awards.