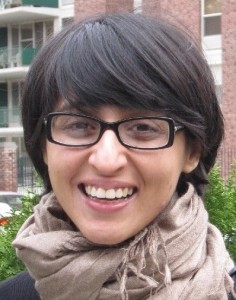 Puruesh Chaudhary has over 7 years of experience in media and strategic communications pertaining to key functional areas covering research and content development. She has been a professional broadcast editor and has worked in leading news channels in Pakistan; both in Urdu and English where she has been designing and developing content for news, current affairs and other special assignments. The Center of International Media Ethics has appointed her as the Ambassador to Pakistan on media ethics.

Her forte is to enable the concepts of knowledge collaboration & information sharing by developing strategic content and outreach communication techniques that have an impact on the socio-economic developmental models. She is the youngest Alumnae at the National Defence University in Pakistan. She has an indepth understanding of the social, political, economic and technological unaddressed challenges, which could be the means of enticing radicalization in the society.

After a successful career in the media industry; Chaudhary’s role as the Director Content for Mishal, a strategic communication’s company on policy designs requires her to develop conceptual terms on key development indicators and functional areas that covers research and development, which facilitates monitoring and evaluation with multiple contingencies.
http://www.mishal.com.pk

She is the President of what originally started of as an initiative called “AGAHI” designed by Mishal Pakistan; and is now established as not-for-profit foundation that aims to increase the capacity of journalists on Investigative Journalism and Responsible Reporting in the country. Since, 2011 Chaudhary in collaboration with the Press Clubs in Punjab, Sindh, Khyber Pukhtoonkhwa and Azad Kashmir has inducted a thoroughly designed programme for the journalists which included;  Investigative Journalism and Media Ethics,  InterFaith, Anti-Money Laundering and Terrorist Organisation Funding, Journalism and Society “Millennium Development Goals’’, Reporting in Terrorism and Conflict, Social Media and Journalism,  Safety Training. Scaling up on her Media Development efforts in Pakistan, Chaudhary organized the First-Ever Journalism Awards in the Country with support of Leading International Media Development Institutes/Partners, Academia, Government of Pakistan, Private Sector including several other stakeholders – recognizing the local journalists on producing counter-narratives in 15 different categories; under the slogan of “Shaping the Future of Journalism”
http://www.agahiawards.com

Prior to being a part of the “Media Development Initiative” by shaping the future of Journalism, Chaudhary was working in Samaa TV, heading the forward planning. She was responsible for generating and implementing original thoughts and concepts related to news and programming while integrating the channel’s initiatives. She enabled the channel to create content on international indicators for economic growth and sustainable development issues, bringing a global perspective.

In December 2006, Chaudhary joined DawnNews as a professional broadcast journalist/editor. Her position required her to generate and edit content, create rundowns, manage packages and produce regular LIVE bulletins for the station.

During her short tenure at the Coca Cola Export Corporation, she was handling the corporation’s public affairs, CSR-activities and their European edition. Within the automotive industry; she worked with Porsche’s Management in setting up their Operations in Lahore and Karachi.