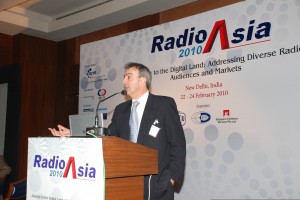 Steve Ahern is an experienced broadcast manager, trainer and curriculum consultant. He is the author of the text book “Making Radio” and a specialist in programming, new media, and multi-platform broadcasting. Before founding Ahern Media & Training Pty Ltd and the International Media & Broadcasting Academy (IMBA), he was previously Director of Radio at the Australian Film Television & Radio School (AFTRS) and a senior executive at the Australian Broadcasting Corporation (ABC).

Steve was awarded an Order of Australia Medal in the 2009 Queen’s Birthday honours list for his contribution to media and training in Australia.

He began his media career as a presenter, producer and announcer at various commercial and community radio stations in Australia, then joined the Australian Broadcasting Corporation where he managed radio and television operations in various locations: Newcastle, Canberra, and Melbourne.

He was the founding consultant for South Africa’s national television, radio and new media training school (NEMISA), and Afghanistan’s Nai Media Institute (NMI). Steve has developed training programs for radio and tv companies in Iran, Singapore and India. He is the founding editor of the radio industry website www.radioinfo.com.au.

Recent AMT projects have included the launch of an international Program Directors course through IMBA, UNESCO training courses in India and Malaysia, broadcast policy development for Singapore’s Ministry of Information and Culture, a review of training for SBS TV and Radio, a branding consultancy for 2MBS FM, management training for MediaCorp, the development of media crisis training for Australia’s Federal Attorney General’s Department, a Media 2.0 Management course for the SABC South Africa, and many other courses.

Steve has also worked in Teaching, International Public Relations, and Executive Management and is a sought-after international conference speaker. He has a Degree in Education, qualifications in Workplace Training and post graduate qualifications in
Business Management. Living in Australia, he is married and has two teenage sons.