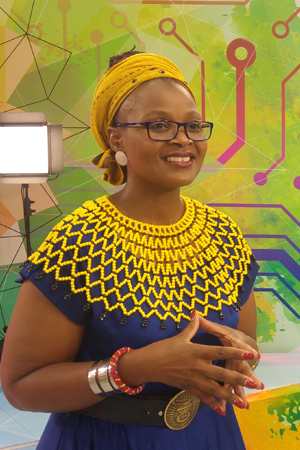 Vuyokazi Charity Matu is one of the Founders, Directors and Shareholders of Okuhle Media, a Film and Television production company producing content for broadcasters and brands locally and internationally. She was born in the rural Eastern Cape and studied at the University of Transkei.  When a community radio was launched on campus, Vuyokazi was one of the presenters selected to launch the radio station. She went on to win the Best Presenter of the year Award as voted by the listeners.

After moving to Cape Town Vuyokazi enrolled at City Varsity Film School, with the aim of learning English while studying acting and presentation for radio and television.  On receiving her Diploma at the Film School she joined the company as a Road Show Team Leader. As they say, the rest is history.

Vuyokazi has worked her way through the business, almost literally fulfilling every role from promoter, to Receptionist, Production Coordinator, Operations Manager, and Head of Operations, responsible for recruiting, managing and placing over 200 promoters nationally every week. She successfully managed national promotional campaigns on behalf of clients such as Woolworths, Premier Foods, Colgate & the Parliament of RSA. Vuyokazi has been involved in various television productions, in different capacities as production manager, scriptwriter, content advisor, researcher, translator, actor, and presenter.  These include ‘BornFrees’ – a documentary series for Etv and ‘Take Part In Parliament’, a series for SABC 2 that educated the public on how to get involved in Parliament.

Vuyokazi has been involved in Industry organisations as Board member for Women in Film and Television and was later voted as Board member for Cape Film Commission. She represented South Africa in France, as part of the Province and Industry’s preparation for the 2010 World Cup. Vuyokazi was also selected by the International Emmy Academy of Television to be part of the South African delegation of Judges for the Emmy Awards Documentary category. She was recently selected by the Western Cape provincial government to be part of Entrepreneurship programme facilitated by the University of Stellenbosch on SMME Development.