Oleg Kupriyanov – Judge of the 2013 AIBs 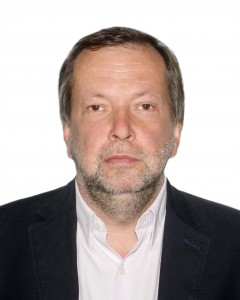 In 1984 he graduated from the Moscow State University (MGU) where he had got a thorough knowledge of Chinese language and literature. As a student Oleg Kupriyanov got interested in TV and radio journalism. In fact his leanings towards the subject at those years determined the future sphere of his professional interests and activities.

Oleg Kupriyanov began his journalist career as an editor of radio programs broadcasted from Moscow to China. His next step was the work on TV. During 1990-ies he fulfilled various duties as a chief editor of TV programs, Director of a TV channel, art director of the “Russian home TV”. It is in those years that Oleg Kupriyanov acquired an invaluable experience in the field of TV journalism and management. He resumed his activities in the radio sphere in 1999 when he was appointed a Deputy General Director at the broadcasting company “Mayak” – a leading national broadcaster in Russia.

In 2009 Oleg Kupriyanov joined The Russian State Broadcasting Company “The Voice of Russia” and since that time he has been working as a Deputy Chairman responsible for the broadcasting policy and international relations. Among his public activities one should be particularly mentioned. From 2011 Oleg Kupriyanov has been serving as a General Director of “The international Union of Russian speaking Broadcasters”. This organization unites companies which broadcast in Russian in different points of the world. The goal of the Union is to help its members to ameliorate their content production, bring new audiences, to render technical support if needed and solve a lot of their specific routine problems.

Oleg Kupriyanov devotes much time to sharing his experience with future journalists and editors as well as mass media mangers. In the Higher School of Economics – one of the most prestigious Russian high education institutions – he teaches such courses as “Political journalism”, “Journalist’s skills”, “Personal management in mass-media” and others.