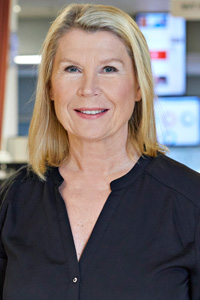 Charlotta Friborg is Head of National News, and leads the Editorial and Managing Team at Swedish public service broadcaster SVT. She has been employed at SVT since 2017. She has a background as editor in chief and CEO at some of Sweden’s leading newspapers and enjoys the greatest respect in the Swedish media landscape as publisher. She was awarded the prestigious Momma Prize 2021 for her excellence in that field. She was also awarded Digital leader of the year 2016 by Salgado, Knowit and Personal&Chef.

Charlotta Friborg is known in Sweden for her courage and integrity as a publisher, not least after her upright response to threats and harassment towards journalists in her organisation when the paper Östgöta Correspondenten covered organised crime in 2014.

Charlotta has held a number of board assignments in organisations for example in the Swedish press publisher association, TU, (2010—2015) and the national publishers association, Utgivarna, (2019 – ongoing). The mission is defending the freedom of speech and the free press. She has a background as CEO and Editor in Chief of newspaper Upsala Nya Tidning, (2015–2016), Editor in Chief and publisher at Östgöta Correspondenten (2011—2014) and Digital Managing Editor and Administrative Managing Editor at Sweden’s leading morning paper Dagens Nyheter. Charlotta Friborg is fluent in English and has studied French and German for five years.