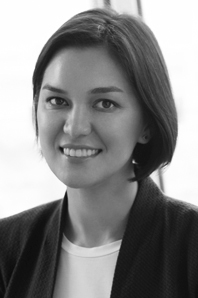 Dinara Toktosunova is the CEO of video news agency Ruptly, which she joined in 2017 to further develop its digital operations worldwide.

Under her leadership, Ruptly has been at the forefront of changing the way news is sourced and distributed. It has pioneered the use of drone footage over warzones and conflict areas, developed an innovative live-streaming platform and launched a new subscription service, Ruptly Pass, that aims to democratise access to top quality video news for small and emerging digital publishers. Last year it also launched Ruptly Academy, a free online journalism mentoring project, which offers education, advice and guidance to the brightest young journalists around the globe.

During Dinara’s tenure, Ruptly has celebrated some of its most successful moments: from the launch of a dedicated 24/7 Verification Unit, to winning awards for its ground-breaking live coverage of the Gilet Jaunes protests in Paris. Ruptly also secured the exclusive footage of Julian Assange’s arrest in April 2019, now-iconic images that were broadcast across the world.

Toktosunova began her career in television in 2005, having previously held positions as a line producer, executive producer and later Deputy Head of News at international news network RT. Her insight and decision-making skills helped the network secure three Emmy nominations (2009, 2012, 2014).

Since she joined Ruptly, the agency has won Shorty Awards for Best Live News Coverage (2019), Best Storytelling and Best Multiplatform Campaign (2020), as well as two Gold Stevie Awards (2020). Ruptly has also dramatically expanded its social media presence during this time. In 2020, it was named the most watched news agency on YouTube*, with its content notching up an incredible 429 million views.