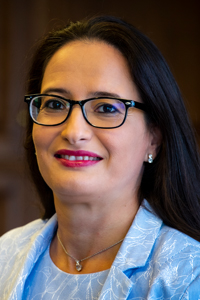 Dr Joanna Spiteri is the Chief Executive Officer at Malta Broadcasting Authority. She obtained her PhD at the University of Stirling in Scotland.  Her research focused on achieving news impartiality in the Maltese TV programmes. For 5 years she lectured at the University of Malta  in media and gender studies. She read for a Masters Degree in Arts at the University of Malta focusing her research on the portrayal of gender issues in news bulletins. She started her career as a journalist at Public Broadcasting Services Ltd and produced current affairs and educational programmes for radio and television.  In November 2015 she co-authored a study published in a book entitled Quality in TV broadcasting – The televiewers’ perspective which analysed what viewers think on the quality in local programming. In August 2016 she was awarded for successfully completing the Study of the US Institute on Journalism and Media from Ohio Univesity – Scripps College of Communication.