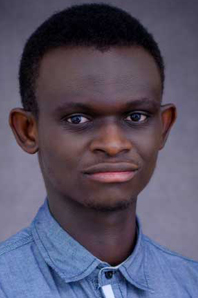 Ebenezar Wikina is a Harvard-trained Journalist and Development specialist who has been working in the Niger Delta for the past 10 years. Ebenezar is popularly known for “The Stroll Live”, an interview series that he founded in 2013 with his java mobile phone and featured over 100 world leaders and experts from more than 30 countries.

As Editor of NDLink, he focuses his reportage on the activities of development stakeholders working in Nigeria’s South by tracking funds spent on projects, giving visibility to local Civil Society Organizations, and providing a platform for development discourse. His work has been featured on The Huffington Post, United Nations blog, World Economic Forum Agenda, BBC World Service, Al Jazeera, CNBC Africa, to mention a few.

In addition to his work in the media, Ebenezar has also been involved in community development over the past decade. He organized West Africa’s only TEDxYouth event in 2014, spoke at the 25th Anniversary of the World Economic Forum on Africa, and served as Technical Committee member for the Government of Rivers State Sustainable Development Goals Office. He is currently a member of the Open Government Partnership Youth collective, ambassador of USAID-funded YouthLead, and sits on the boards of the Port Harcourt Global Shapers Hub and Sickle Cell Awareness and Health Foundation (SCAHF).

This extensive work has earned him several awards and recognition, some of which include; The Mandela Washington Fellowship, the maiden Soundcity Africa MVP for Community Development, the British Council’s Future News Worldwide, the Global Investigative Journalism Fellowship, to mention a few.

Ebenezar guest lectures “Online Journalism” at Ken Saro-Wiwa Polytechnic, and has so far co-authored two books. Being a passionate advocate for virtual learning, he has studied at Harvard Kennedy School, London School of Journalism, International Institute of Journalism, Massachusetts Institute of Technology (MIT), and Nexford University.