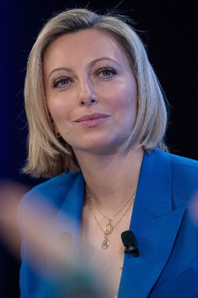 Francine Lacqua is the award-winning London-based co-anchor of “Bloomberg Surveillance,” and the anchor of “Leaders with Lacqua,”

Since joining Bloomberg in 2000, Lacqua has covered the World Economic Forum in Davos, IMF in Washington, G20 meetings, the EU Leaders Summit and OPEC. She also led Bloomberg Television’s coverage of the Italian and French elections where she was one of the first international reporters to interview cabinet members.

In 2018, Lacqua received the Knight of the Order of the Star of Italy (Cavaliere dell’Ordine della Stella d’Italia). The decoration, honoring Italians living abroad who promote national prestige and co-operation with the nation, was presented by the Italian Ambassador Raffaele Trombetta on behalf of the president of Italy.

In 2013 Lacqua won ‘International TV Personality of the Year’ at the AIB Media Awards. She was previously nominated in 2009 and 2010. In 2012, she was part of the Bloomberg team that won the OPEC award for ‘Public Interest Reporting’. She has an LLB in English law from King’s College in London and earned her undergraduate degree at the Sorbonne. She is fluent in French and Italian.