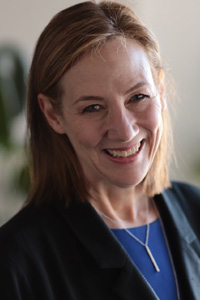 Prior to coming to Pink Triangle Press, McGuire was a Visiting Fellow at the Reuters Institute of Journalism at Oxford University where she explored approaches to a “collaborative economy” in journalism and media.

Jennifer McGuire was General Manager and Editor in Chief of CBC News (television, radio, audio, digital) at Canada’s national public broadcaster from 2009-2020. This internationally renowned news organization is the largest news organization in the country and McGuire is the longest serving Editor in Chief in its history. CBC News has international bureaus in London, Beijing, Washington, New York, Los Angeles, and until recent world events, Moscow. Known as an innovator and transformative leader, McGuire expanded original enterprise and investigative journalism, and her vision for CBC News set an aggressive digital path for the legacy news broadcast organization, now dominant in that space in Canada.

While at CBC, McGuire held several other key multi-platform leadership roles in local services and at CBC Radio as Executive Director and Director of Programming.  A gifted programmer, she led the creation and launch of many iconic shows, including The Current, the national daily radio morning current affairs show, and with her team led the repositioning of CBC’s music services into a digital multi-genre music offer, expanding its historical reach on radio but well beyond.

McGuire began her career on a local Ottawa morning radio show in the nation’s capital. An award-winning producer she held many production jobs in television and radio before moving into media management.  She sits on several non-profit boards including The Arthur Burns Fellowship (icfj.org). She holds a Bachelor of Science degree in Biology and a Graduate Diploma in Journalism.  McGuire is based in Toronto.