Joanna Levison is the Director of C 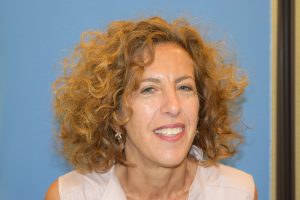 ommunications and External Relations at Radio Free Europe/Radio Liberty (RFE/RL) with over 20 years of experience in international media relations and democracy promotion.  Based in the company’s headquarters in the Czech Republic, she is responsible for media promotion, outreach, fellowship programs, and journalists’ advocacy, overseeing operations both in the company’s Prague and Washington, D.C. offices.  Before joining RFE/RL in 2009, Ms. Levison worked as a foreign policy officer for Iraq and the Middle East in the Bureau of Democracy, Human Rights and Labor at the U.S. Department of State. She previously worked for the National Democratic Institute for International Affairs, managing programs in the former Soviet Union, and consulted for the International Republican Institute. She has an M.A. in Russian and East European Studies from the University of Michigan at Ann Arbor, and a B.A. from Swarthmore College.