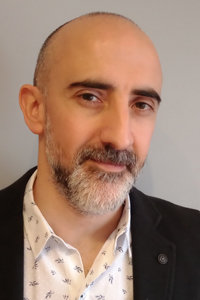 Juan Pablo Córdoba is an Argentine multimedia producer, who has been working for 17 years at Radio Mitre, the No.1 radio station in Argentina.

He is skilled in the realization of artistic, journalistic, institutional, and documentary formats. He also generates and produces podcasts and digital, audio, and video content, both for Radio Mitre and other independent media and NGOs. And he collaborates with the conception of several radio stations throughout the country.

In his work as a screenwriter and producer for Radio Mitre, he has won numerous awards, both national and international. Of these award-winning pieces, the most prominent are: the special report about the West-Eastern Divan Orchestra, the documentary about the ARA San Juan submarine, and a report concerning the exile of Venezuelan people in Argentina -audio version and video version- fleeing from the Nicolás Maduro regime.

Besides, Juan Pablo has been a radio teacher for several years, in the subjects “Radio Script” and “Production and Self-management”.