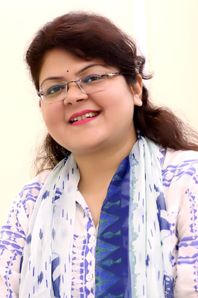 K Rashi Kumar is an academician, a well-known radio broadcaster, an author and citizen journalist from India. She has over 22 years of experience both in Radio Broadcasting and Academics. She is currently working with Prayagraj-based Institute of Professional Studies, University of Allahabad (India’s Fourth Oldest University) as Faculty for Radio Journalism. She has been honoured and felicitated by various organisations/institutions for her contributions to society and the nation.

Starting her career in 1997 with All India Radio (AIR) as a host for English programmes, she is the first voice of North Indian State of Uttar Pradesh’s first FM station ‘AIR FM Rainbow, Lucknow’ that was launched on August 20, 2000. She has worked with educational, commercial and public radio stations since 1997. She has over 1800 live radio shows of different genres to her credit.

She has served as Programming Head with two of India’s biggest corporate Radio channels, the 92.7 BIG FM and South Asia FM. She has also worked with Gyanvani-Allahabad (India’s first educational radio channel). Rashi has trained many aspirants on the ‘Art of Communication’ and ‘RJing’ at the Academy of Broadcasting, Prayagraj in her capacity as Academic/Centre Head.

She has over a dozen awards to her credit including Hindustan Times Women Achievers’ Award ‘Voice/Face of UP’ (2016) and was honoured with Rani Laxmi Bai Award by Uttar Pradesh Government (2016). She has been honoured with Legends 2018 Award for Video Journalism, National Gems of Humanity Award 2019 and the Award for Social, Educational and Women Empowerment 2019 by Kinnar Akhada, a transgender monastic order plus the Award for Citizen Journalism by Gandhi Akadimic Sansthan 2020 among others.

She has mentored hundreds of students especially girls on Skills Development. A Guest Broadcaster with All lndia Radio, India’s national broadcasting service, Rashi is a hard-core educator with over 23 years of experience in education at different schools and colleges in Lucknow and Prayagraj.

She has over 600 video/audio stories to her credit as Citizen Journalist done philanthropically since 2016 on various social, educative, religious, humane and cultural subjects. Rashi has also interviewed celebrities from all walks of life.