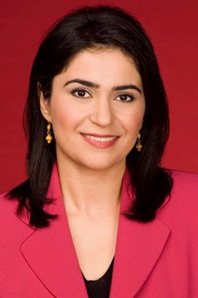 Parisa Khosravi is an award winning journalist with three decades of experience on the world stage.

CNN lauded Parisa in its farewell to her by stating:  “No one has played a greater role in emergence and then dominance of CNN international news gathering than Parisa.”

Some of these historic events included Tiananmen Square, the Iraq wars, Fall of the Iron Curtain, the End of Apartheid, 9/11, Hurricane Katrina, Tsunamis in Southeast Asia and Japan, the Earthquake in Haiti, the Arab Spring and the Syrian civil war.

As CNN’s first ever Ambassador and Senior Vice President for Global Relations, Parisa built and maintained ongoing working relationships with world leaders, dignitaries and high-ranking officials while ensuring top editorial access and forging positive strategic relationships for the network all over the world.

Her experience and first-hand knowledge ranges from cross-cultural relations to leading through international and domestic crises.  Parisa is a recognized authority on safety and security matters for her meticulous and decisive management of her staff as they covered the world’s most dangerous hot spots, conflicts and natural disasters.

As a top CNN senior executive who proved her leadership and executive skills for over two decades at the leading global news network, Parisa’s responsibilities spanned across editorial, operational and administrative departments, which included 45 CNN bureaus worldwide and more than 100 correspondents, as well as a large behind the scene support staff around the world.

In 2015, Parisa left CNN to found the international communications consultancy – Payam Global Strategies – that is dedicated to creating “rising tide” cultures, companies and countries that develop conscientious leaders who give voice to the voiceless.

One of Parisa’s great joys is speaking for global events such as the Parliament of World Religions and the Novus Summit at United Nations – and for organizations such as Delta Airlines, NASA, College of St. Rose, and the American Bar Association.

Her TEDx talk on “The Power of Finding Your Voice” has been shown around the world and is lauded for its transformational impact.  As one reviewer said, “I will never look at another person with autism again without remembering this talk and silencing my initial judgement.”

Parisa is a dedicated advocate for individuals with autism and  focused her efforts on helping “silent champions” – like her son, Payam – contribute to their fullest potential and be given the respect, dignity and opportunities they deserve.