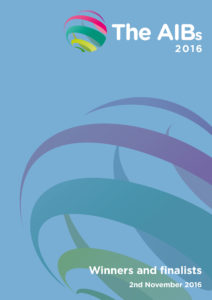 Read the Winners and Finalists book to find out who won in the AIBs 2016. You’ll discover what our judges said about the winning entries and who received high commendations from our international panel of jurors.

See the clip reels from the AIBs 2016 here 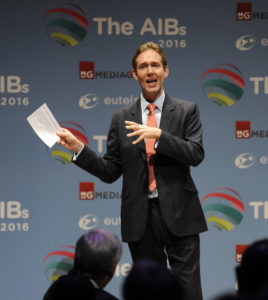 The event took place in London on Wednesday 2 November 2016, and celebrated the work of producers, editors and journalists from around the world. Work from nearly 40 countries was submitted to the AIBs in 2016 and the shortlist included work from major broadcasters, online video companies, newspapers and independent producers.

Mark has travelled the world to interview more than ten thousand newsmakers. They’ve included Presidents, Princes, Prime Ministers, members of the US Federal Reserve and most of the global business elite. Among his personal career highlights are Microsoft founder Bill Gates and the late Israeli leader Shimon Peres.

Supporters of the AIBs 2016

Each year, the AIBs gala dinner attracts guests from all parts of the world. Programme makers, executives, editors and journalists are among those who attend the event.

In 2016, the AIB added to the value of the awards with the launch of the #iamabroadcaster – The AIBs Masterclass in association with IABM.

Open to all the AIBs gala dinner guests, and to others in the industry (for a nominal fee), this half-day event allowed delegates from around the world the opportunity to meet colleagues and to share knowledge, ideas, experiences and inspiration with some of the world’s top factual programme makers.

The Masterclass – on Thursday 3 November, the day after the main awards event – took place at the headquarters of the BBC at the kind invitation of BBC World Service. The famous art deco Council Chamber, the setting for many significant meetings of the BBC’s Board over the past 84 years, was our venue. #iamabroadcaster offered an opportunity to see part of Broadcasting House that’s not generally accessible to the public.

Despite the formal setting, the #iamabroadcaster – The AIBs Masterclass was informal and highly interactive. It provided a forum to discuss the way programme making and story-telling works in different markets, and explored the challenges of reaching linear and online audiences.

#iamabroadcaster participants also benefited from a screening of the documentary short feature The Sound Man, telling the story of 62-year-old location sound engineer Abdul Ramadhan. Abdul was at the event to talk about his life on location across Africa, capturing sound for some of the leading photojournalists of the past 40 years. Film-maker Chip Duncan was also there to answer questions about The Sound Man that he produced and his career in documentaries.

And finally, there was the chance to hear about the way Qatar is preserving its TV and film archive. They have started a remarkable project – perhaps the largest in the world – to restore, digitise and catalogue the entire TV and film archive of this young Gulf nation. Participants learnt why saving the nation’s audio-visual history is important and how they’ve undertaken the project that will make programmes that haven’t been seen for many years accessible to future generations.

Pictures from the AIBs 2016