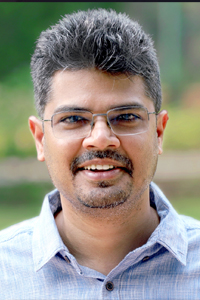 Rajen Garabadu is an internationally award-winning producer with 27 years of experience in electronic journalism. As the production and creative head of India’s largest news network, Rajen Garabadu has steered over two dozen TV news channel launches, rebranding and refresh projects.

Having begun his career as a Correspondent, Rajen switched to become a producer. Since then, he has produced content for seven general elections, more than 100 assembly elections and thousands of news and current affairs television programmes. Rajen has led the production and creative function for 17 years and mentored hundreds of TV news professionals.

An avid quizzer in earlier years and a passionate writer in recent years, Rajen publishes his opinion on news18.com and blogs on rajen.blog