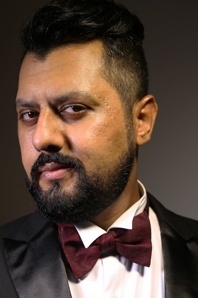 Shehzad Hameed Ahmad is an award winning Pakistani documentary filmmaker and broadcast journalist with a wealth of experience in commercial television news and current affairs that spans over 14 years.

Since 2015, Shehzad has exclusively worked as Senior Producer International Productions with Channel NewsAsia Singapore traveling across the globe for his documentaries. His work has ranged from social issues such as child brides in Nepal to investigations into child abuse cases in Pakistan to embedding in war zones like Afghanistan, Marawi and the jungles of Sulawesi. He has accessed and filmed with the most dangerous groups in the world, be it Taliban leaders in hiding in Afghanistan, the Mumbai attack masterminds in Pakistan, ISIS recruiters in Marawi or white supremacist militia groups in Georgia, Shehzad has garnered a reputation in gaining unprecedented access to bring to light the miseries of people stuck in conflict. Due to the quality of his work, his documentaries have broadcast on TVF International, Toggle, Dawn News, National Geographic, TV Ontario, Channel NewsAsia and Crime and Investigation Channel amongst others.

Shehzad has remained a Fulbright scholar at New York University, graduating with a Master’s degree in Documentary Filmmaking. Owing to his work, Shehzad received the Prince of Asturias Award for International Cooperation in 2014 from the King of Spain at the annual ceremony in Asturias, Spain – an honour he shares with Nelson Mandela. At the New York Festivals, Shehzad has won 1 Gold, 1 Silver and 2 Bronze awards in the Human Concerns category. In recognition of his investigative documentary on child abuse, Mediacorp awarded him the Mediacorp News Award of the Year in 2015. He later won Pakistan’s Agahi Journalist of the year award in 2016 for his film on girls education in Pakistan which was endorsed by Malala Yousafzai. Shehzad won 2 Silver awards at the World Media Festivals in Hamburg, Germany for his documentary on Afghanistan. Mr. Ahmad was born in Auchi, Nigeria but brought up in Islamabad, and now lives in Singapore which he considers his home.