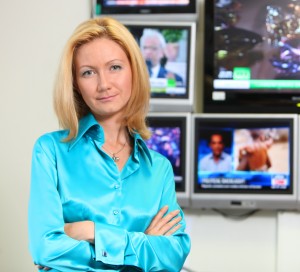 Victoria Vorontsova, 32, holds a degree in International Relations from the Moscow State Linguistic University. Also, under exchange programs, she attended classes at the Complutense University of Madrid (1997) and the University of Northern Iowa (1998).

Her television career began in 2003 on Russian Channel One, where she worked as a world news editor.

In July 2009, Victoria was appointed head of news for RT’s Spanish-language channel.

Prior to that, she worked as a news editor at RT’s English-language channel.

Her broadcast of November 7, 2007, was later nominated for the TEFI Award as best news program.

In 2010 Victoria became a member of Russian Acadamy of Television.

Prior to her television career, Victoria worked as a marketing and PR specialist for Audi and GM.

In her free time, Victoria enjoys traveling and professional-level photography.