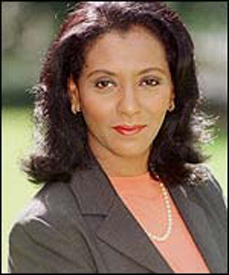 Zeinab Badawi has been with the BBC for the best part of a decade and is one of the BBC’s most experienced and versatile presenters. She is highly valued as one of the most senior news anchors on the BBC World News Channel and on BBC 4 TV. She currently presents her own evening daily programme ‘World News Today’ at 1900 on BBC 4 TV, this is the only programme which is simultaneously broadcast on the BBC World Channel. It attracts tens of millions of viewers across the world – especially in Europe where it is compulsive viewing for many. It offers a daily digest and analysis of the major news events around the world – and is packed with live interviews with major players and commentators.
Zeinab has been in broadcasting for more than two decades and has worked on an extensive and impressive range of programmes. She is a regular presenter of the BBC’s hard-hitting in-depth interview programme Hardtalk, which is broadcast on both BBC World News and the News Channel. Her guests have incuded presidents, prime-ministers, government ministers and other people of influence like the Dalai Lama and Desmond Tutu – and even the odd Hollywood A-lister like Whoopi Goldberg!
Zeinab also presents in-depth discussions on the BBC World Debate series, like the Nobel Minds programme in which all the year’s Nobel Laureates are engaged in debate in Stockholm. Her guests on such programmes have included Bill Clinton and Bill Gates. Zeinab also films and reports from all over the world.
She is also deeply familiar with domestic stories, having worked at BBC Westminster on live political programmes for three years. Zeinab is as much at home presenting in the studio as she is reporting live from party conferences or live locations – with no autocue.
Many viewers in Britain remember her as presenter of Channel 4 News, which she co-presented with Jon Snow for nearly a decade (1989 to 1998) – anchoring the show in his absence.
An Oxford graduate in politics and economics, with a post-graduate degree on the Middle East from London University (awarded with a distinction), Zeinab understands the issues behind the headlines and has great authority- but with a light touch!
Zeinab was named International TV Personality of The Year at the prestigious Association for International Broadcasting annual global media excellence awards at a gala event in London on 4th November 2009. The AIBs recognize creativity and innovation in global broadcasting across TV, radio, cross-media, marketing and technology. The AIBs are unique in broadcasting because of their independence from commercial interests – an independent panel of judges consisting of respected professionals from the broadcasting and wider industries selected the winners among more than 200 entries initially submitted from 26 countries as diverse as Argentina, France, India, UAE, USA, to name but a few.
Zeinab also chairs conferences and seminars and is a highly skilled conference facilitator and after dinner speaker. She has a wealth of experience hosting events and award ceremonies, both at home and abroad. She is a trustee of the National Portrait Gallery, the Centre for Contemporary British History and a trustee of the British Council. She has four children – between 9 to 15