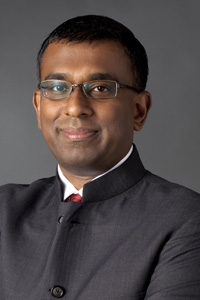 An honours graduate of the London School of Economics, I have been a journalist and editor for more than 25 years. As the Editor-in-Chief of CNA (Channel NewsAsia), I am one of a select group of editors in Asia who has had the privilege of leading television, radio, print and digital newsrooms. In 2020, I lead CNA to clinch the London-based Association for International Broadcasting (AIB) Channel of the Year award – the most prestigious of the more than 60 international awards CNA has won in the past year.

I began my career as a Journalist at Singapore’s leading newspaper, The Straits Times. I worked my way up to being Senior Correspondent covering both politics and macro-economics. I then moved to join Mediacorp, Singapore’s national media network, where I held a variety of senior editorial roles before being appointed the Editor-in-Chief in 2013, overseeing all the television, radio and digital newsrooms.

As Editor-in-Chief, I was entrusted with the unique opportunity to execute a digital transformation of all the newsrooms at Mediacorp, which included the design and build of an integrated newsroom; the introduction of new technologies and real-time analytics; the implementation of digital first editorial processes; and a complete culture and mission change. These have paid dividends with significantly improved talent attraction and retention as well as a doubling of international awards for journalism.

Aside from driving daily content decisions for compelling coverage at the global stage across all platforms, I have also shaped a set of clear and coherent editorial values for the News Group in Mediacorp, which comprises some 1,000 staff. I have also been entrusted to oversee broadcast engineering for Mediacorp an Al Strategy for the newsroom.

In 2021, I was concurrently appointed the Chief Sustainability Officer for Mediacorp and am currently driving the company’s green plan.

Through my career, I have also had the privilege of extensive policy and Government relations exposure. This dates back to when I served as a research officer to former Singapore Prime Minister Lee Kuan Yew helping him to pen the first of his memoirs. As Editor-in-Chief, I have regular contact with senior political leaders, diplomats and editors across Asia. I have also served on the Board of Directors of organisations such as the Civil Service College, Singapore Land Authority and Singapore Maritime and Port Authority.