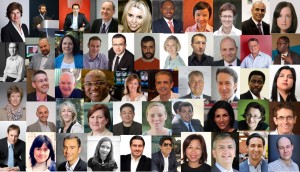 The Association for International Broadcasting has announced its panel of judges for its tenth annual international broadcasting awards, the AIBs 2014.   The senior media executives who make up the independent panel come from all across the world and will judge the best in global factual radio, TV and online broadcasting.

CRANBROOK, UK 04 SEPTEMBER 2014 – The panel of 50 senior international media experts brought together by the AIB (Association for International Broadcasting) to judge the AIBs 2014 represents TV, radio and online broadcasting from all across the globe with in-depth knowledge of commissioning, writing, producing, editing and distribution.  They have extensive experience in current affairs, investigative documentaries, short documentaries, children’s programmes, sport, science, transmission and broadcasting technology and will be bringing their insight and extensive knowledge to the judging the record number of entries received for this year’s awards which have come from all over the world.

“We are grateful to our panel of experts for agreeing to give up their time to judge the awards” said Simon Spanswick, CEO of the Association for International Broadcasting. “Their diversity of backgrounds and wide experience, coupled with the fact that they are free to choose the best entries without being influenced by any vested interest, ensures that the AIBs will continue to reward the very best of international broadcasting.”

The list of judges, with links to their biographies of the judges can be found at theaibs.tv/aibs-2014-judges/.

The AIBs are now in their tenth year and are independent of commercial interest.  They attract entries from throughout the world, representing the best of international factual broadcasting.  The 15 different categories to be judged cover radio, television and online media across a broad spectrum from single news events to long-term investigation with special categories for children’s programmes, for sport and for coverage of science.  The categories also include awards for radio and television personalities of the year.

The winners of the AIBs will be announced at the AIB awards gala on Wednesday 5 November 2014 which will be held at LSO St Luke’s in London.

The AIBs 2014 are sponsored by Eutelsat

Established in 1993, the AIB is the international industry association and global knowledge network for the international broadcasting industry– cross-media, cross-border, cross-cultural. With a reach of over 25,000 communicators and media professionals, AIB is a unique centre of information about international broadcasting, covering TV, radio, online and mobile. AIB researches regular market intelligence briefings for its members and provides client-specific consultancy and project support. Members receive an extensive package of services throughout the year. AIB publishes the comprehensive Global Broadcasting Sourcebook and the international media magazine, The Channel. AIB hosts the annual AIB International Media Excellence Awards – the “AIBs”. For more information, visit www.aib.org.uk and theaibs.tv or call +44 (0) 20 7993 2557

Eutelsat is one of the world’s leading and most experienced operators of communications satellites. The company provides capacity on 36 satellites to clients that include broadcasters and broadcasting associations, pay-TV operators, video, data and internet service providers, enterprises and government agencies. Eutelsat’s satellites provide ubiquitous coverage of Europe, the Middle East, Africa, Asia-Pacific and the Americas, enabling video, data, broadband and government communications to be established irrespective of a user’s location.
For more information, visit www.eutelsat.com